Can Barely Wheat For Your Crops To Cool?

See all Blogs
Enquire Now
Can Barely Wheat For Your Crops To Cool?

The Plug&Cool® Team met with arable farmer James Faulkner, of RDS Farms, to discuss the benefits of using a Plug&Cool® system.

James has been an arable farmer for nineteen years, so he knows the industry well. His farm yields 7,000-8,000 tonnes of grain a year, which is a lot of grain to manage. He has three large grain stores onsite, so he wanted something that utilised these. James was having trouble cooling his grain evenly. He had used other brands of grain cooling fan systems that he didn’t feel were performing well, so he gave the Plug&Cool® team a ring. He had heard about Plug&Cool® as our headquarters were local to his farm, so he decided to give us a go.

Plug&Cool® is one of the easiest to use grain cooling fan systems on the market. James found the system simple to set up and was impressed with the quality of the range.

James quickly found that the condition of the grain in storage was very good after using the system. He found this out for definite after cooling some grain for an external agency, they required the cooling to be documented and monitored. He was very impressed by how quickly the grain was cooled, check out the results in the graph below. 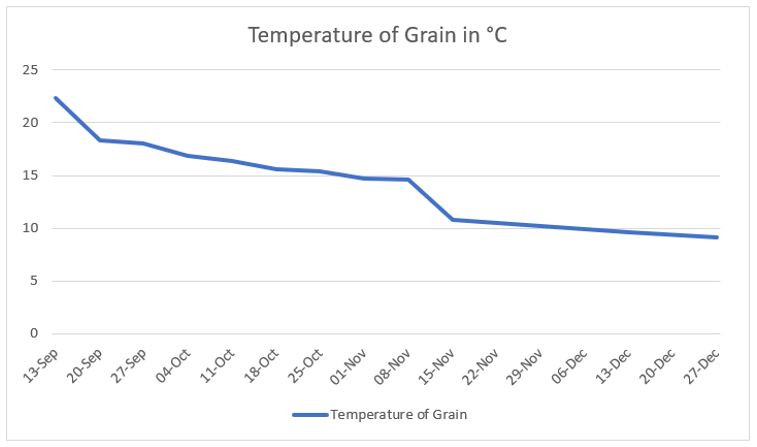 As you can see, the grain was in storage since September, at 23 degrees. By December it had dropped down to 9 degrees – this is with the grain cooling fans only running when needed and when the conditions were perfect for grain cooling.

An added benefit was how much money James saved, because the PlugandCool® fans are responsive the energy saving was huge! The system is so affordable it will eventually pay for itself.

James said the PlugandCool® system ‘absolutely’ was good value for money. To learn how Plug&Cool® would benefit your farm, give one of our friendly sales team a call on 01621 868 138 or email agricultural@gibbonsgroup.co.uk.